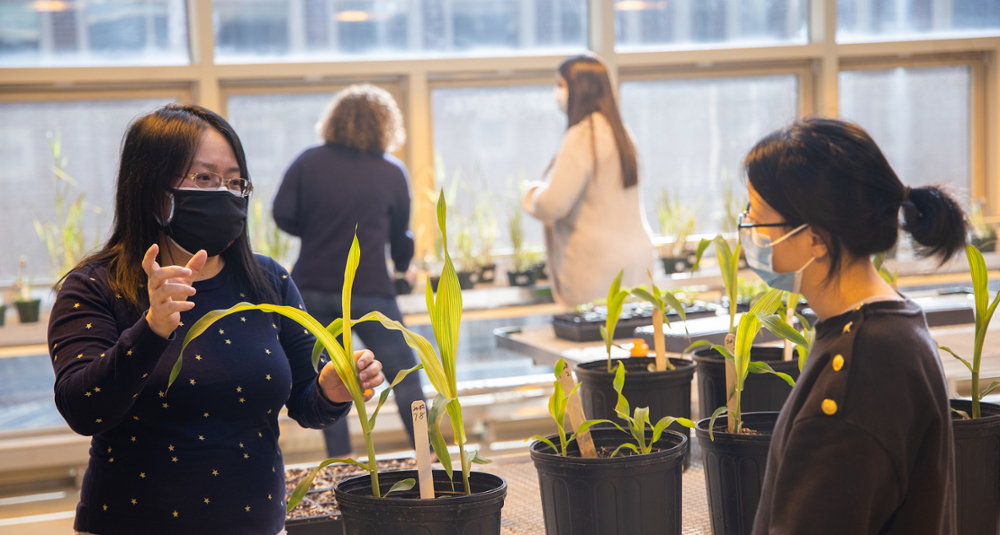 Zhao moved her family — and her maize stocks — to Oxford two months before her official appointment began, arriving June 1, 2018. She was able to plant her maize stocks in plots at Miami’s Ecology Research Center in time for the beginning of the experimental field season.

We caught up with Zhao, now in her third year at Miami. She has a recent grant from the National Institutes of Health (NIH), a new major publication published this week, and a new baby. 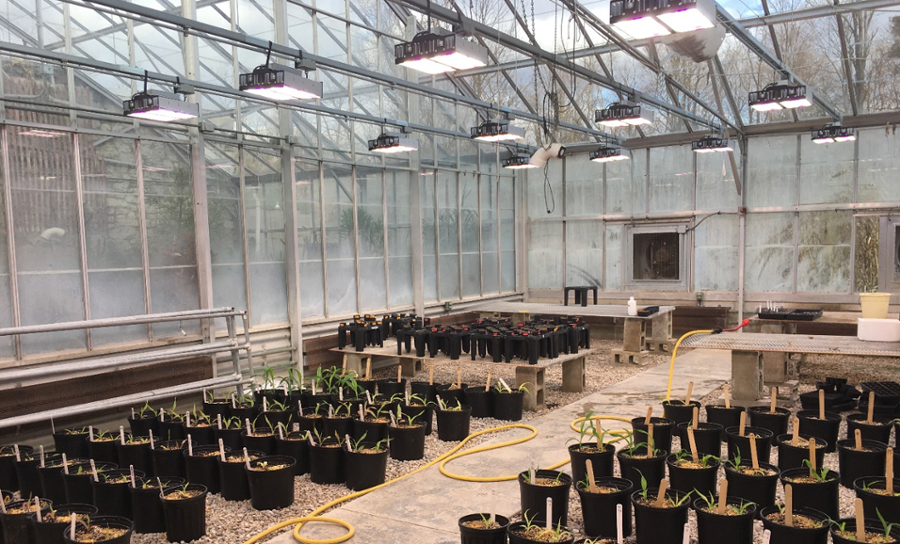 Maize seedlings growing under new LED lighting in the Belk Greenhouse in Boyd Hall (this and the following two images by Zhao).

Our city of Oxford is surrounded by corn and soybean fields, it seems. Where do you grow your corn plants on campus?

I normally use the Belk Greenhouse (in Boyd Hall) to propagate my corn stocks during the winter, and plant large populations at the Ecology Research Center during the summer. I really appreciate the biology department recently installing 20 LED lights in my greenhouse room at Boyd (note: new LED lighting in Belk was initiated by Jack Keegan, greenhouse manager, before his retirement). I also use the newly-renovated Pearson Hall greenhouse to collect plant tissues. And I use the greenhouse garden next to Boyd Hall.

You were awarded a grant from the NIH last spring for more than $431,000. You also received a grant last month from Miami’s Committee on Faculty Research to support your work.  Tell us a little about your research on transposable elements.

In the late 1940s, maize geneticist Barbara McClintock challenged the concept of genes were stable on chromosomes and discovered that some genes could move from one location on the genome to another. These mobile “genes” or elements, now known as transposons or transposable elements (TEs), were initially discovered in maize. TEs make up nearly half of our human genome and up to 90% of the maize genome.

Although transposons have the ability to move, most transposons are largely quiescent (we call it silenced) by epigenetic pathways, a mechanism that causes heritable phenotype changes but does not involve alterations in the DNA sequence. 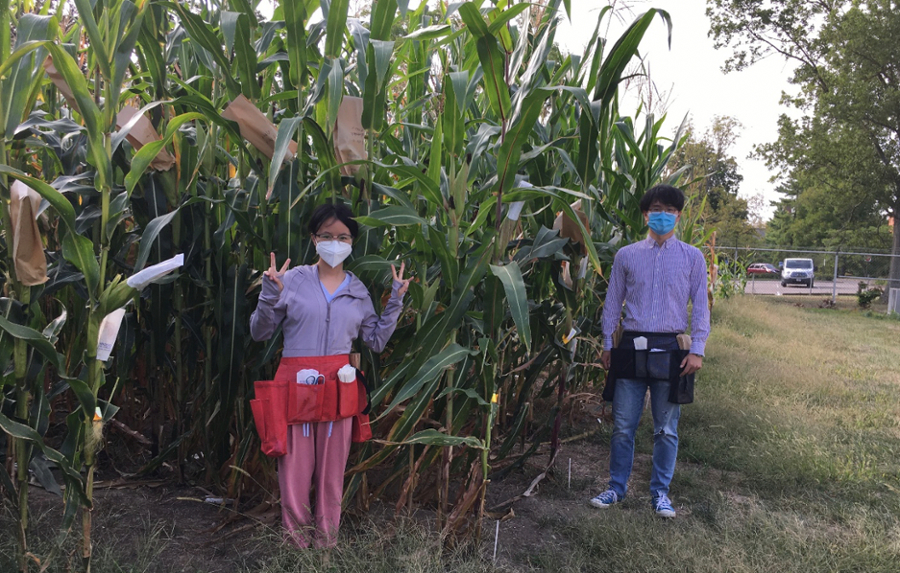 My research involves the initiation and maintenance of transposon silencing, and determination of how transposons contribute to meiotic recombination, among other areas.

Does this have implications beyond the lab, for instance in agriculture and human diseases?

Meiotic recombination is a process that tells how chromosomes pair up and generate crossovers during reproduction in order to reciprocally exchange genetic material.

Plant breeding relies on meiotic recombination, which reshuffles genetic information and generates new combinations of alleles, to develop crops with high yield and other improved traits.

Studying this process in plants can help us understand the process in humans.

Proper chromosome pairing and recombination are essential for human reproduction, and lesions in this process can result in a variety of disorders such as pregnancy failure, congenital disorders and several other genetic diseases.

Your research paper “The mop1 mutation affects the recombination landscape in maize” was published this week in Proceedings of the National Academy of Sciences (PNAS). What are some highlights? 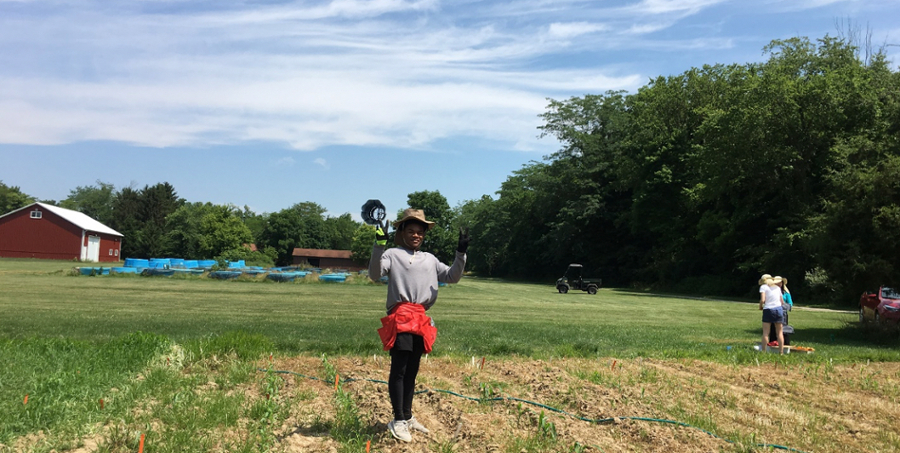 Two undergraduates are co-authors on the paper: Tyshawn Ferrell from Albany State University, who conducted research with me in summer 2019 as a participant in Miami's Ecology REU (Research Experience for Undergraduates), and Claire Stoll (Miami ’20) who worked on the project as a 2019 Undergraduate Summer Scholar.

Congratulations on the birth of your daughter last summer (August, 2020).

How did this impact your summer field season and data collection?

During the pandemic and my pregnancy I received a lot of support from my College (Arts and Science), my department, my family, especially my husband, and my graduate students. My graduate students did all the pollination in the field during my pregnancy. I really appreciate their hard work. Actually, my son, who is six years old now, started to help me shoot bag corn ears (bags used to cover ear shoots during hand pollination) and do pollination when he was four years old, my first field season here. My daughter was exposed to science even before her birth: My husband, my boy and my girl before her birth were helping me plant seeds, remove weeds, collect plant sample tissues, shoot bag ears, and bag tassels this past summer.

We were collecting sample tissues on my due date, and the data derived from these tissues are an essential part of our PNAS paper.

Zhao is one of five assistant professors in the biology department who joined Miami in the past two years.

Learn about the other four: