Miami University will honor NBA executive and basketball icon Wayne Embry (Miami ’58) and his late wife, Theresa “Terri” Embry (Miami ’60), with the Freedom Summer of ’64 Award at 11 a.m. Tuesday, May 18, outside the main entrance of Millett Hall, Miami’s basketball arena. 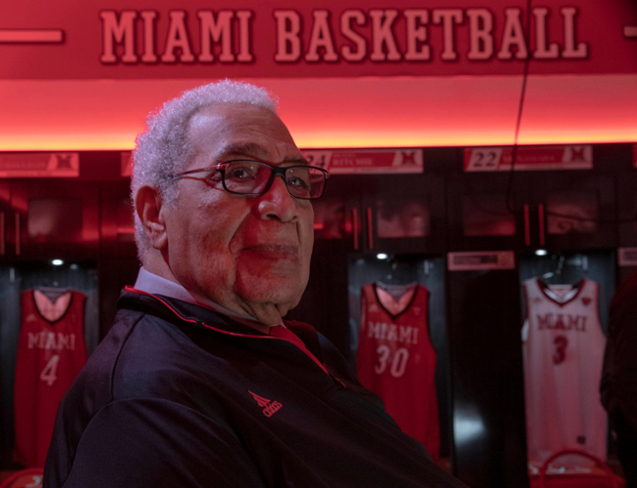 Miami University will honor NBA executive and basketball icon Wayne Embry (Miami ’58) and his late wife, Theresa “Terri” Embry (Miami ’60), with the Freedom Summer of ’64 Award at 11 a.m. Tuesday, May 18, outside the main entrance of Millett Hall, Miami’s basketball arena.

A statue capturing Embry’s likeness and signature hook shot will be unveiled after the ceremony. The statue — along with a Wayne Embry Scholarship to support Miami varsity men’s basketball student-athletes — were created from private donations.

The Freedom Summer of '64 Award is bestowed each year upon a distinguished leader who has inspired the nation to advance civil rights and social justice. It will be presented to Embry and posthumously to Terri, his wife of 62 years, to honor their lifetime of commitment to social justice, for breaking racial barriers and for their mentorship.

“Wayne’s success on the court and his achievements as a sports leader laid the foundation and provided the inspiration to the generations who have followed him,” Miami University President Gregory Crawford said. “From Terri’s march across the bridge in Selma, to her service to the community, and her mentorship and support of ‘her guys’ in the NBA and their wives, she touched many lives and advanced social justice in all she did.” 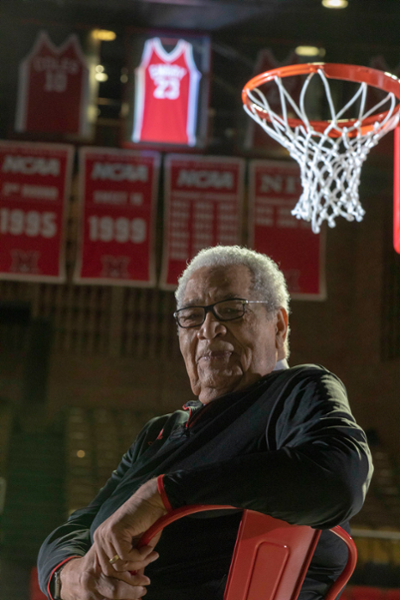 Wayne Embry sits on the Millett Hall court with his retired jersey in the background (photo by Jeff Sabo).

The statue capturing Embry’s likeness and signature hook shot honors his contributions to his alma mater, the state of Ohio, and his transformative impact on the sport of basketball.

“The impact that Wayne Embry has made in his lifetime goes so far beyond Miami University and the game of basketball at all levels. It is impossible to put into words the true scope of his influence and the ground he paved for so many,” Miami University Director of Athletics David Sayler said.

The statue was created by Tom Tsuchiya, who also sculpted some bronze statues of Cincinnati Reds legends at Great American Ball Park. The statue and scholarship were created thanks to private support from the Gordon and Llura Gund 1993 Foundation, the Toronto Raptors and the Cleveland Cavaliers, along with friends, teammates and admirers of Embry.

The fundraising effort was led by Randy Ayers (Miami ’78, MEd ’81), who credits Embry with paving the way for his own basketball career and success at Miami and as an alumnus. Ayers is currently an assistant coach for the Phoenix Suns.

A lengthy career on and off the court

Embry was inducted into Miami’s Athletics Hall of Fame in 1970 and is one of only six Miami men’s basketball players to have had his number retired. He is enshrined in the Naismith Hall of Fame, the Basketball Hall of Fame and the Cleveland Cavaliers Wall of Honor.

Embry’s more than 50-year NBA career began as a player for the Cincinnati Royals in 1958. He was the team’s standout center until he joined the Boston Celtics in 1966. After finishing his playing career in 1969 as the Milwaukee Bucks’ first-ever team captain, he became the team’s general manager and NBA’s first Black general manager in 1972. The Bucks made it to the playoffs four times during his eight seasons as general manager.

In 2004, Embry became senior basketball advisor to the president of the Toronto Raptors, a position in which he continues to serve. He was interim general manager in 2006 and played a critical role in the Raptors’ 2019 NBA championship. 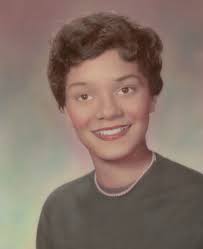 Embry served on his alma mater’s board of trustees for 14 years, including one year as chairman of the board. His service further included the College of Education, Health and Society’s (EHS) advisory board, with Terri, who died on Aug. 27, 2020 at age 82. She earned a bachelor’s degree in education from Miami and later served on EHS’s Teachers Advisory Committee.

As a fearless community activist, she joined Martin Luther King Jr. and others for the now historic march from Selma to Montgomery, Alabama — part of a series of civil rights protests that led to passage of the Voting Rights Act of 1965.

Terri Embry fought for racial equity and inclusion for more than 50 years. Her community volunteer experience spanned the Midwest, having served as board chair of two different Urban League affiliates, in Cleveland and Milwaukee.

The Freedom Summer of ’64 Award

Miami presented Congressman John Lewis with the inaugural Freedom Summer of '64 Award in Washington, D.C., in 2018. Other recipients include the Mt. Zion United Methodist Church in Philadelphia, Mississippi, in 2019; radio broadcaster and civil rights advocate Joe Madison, and Carolyn Jefferson-Jenkins, the first woman of color to be elected president of the League of Women Voters, both in 2020.

In 1964 in Oxford — at what was then the Western College for Women but is now part of Miami University’s Western campus — Student Nonviolent Coordinating Committee (SNCC) leader Bob Moses led the training of 800 college students to travel south to register African American voters.

The Freedom Summer of ’64 Award recognizes the spirit of those 800 students who assembled in Oxford for the Mississippi Summer training sessions. It is steeped in the belief that by understanding the past, we can build a more just and inclusive future.

“We believe that all Wayne and Terri have done in the service of this nation and world embodies the qualities of the past and sets an example for all we hope to do in the future,” Crawford said.

All attending the Freedom Summer of '64 Award ceremony and statue event will be required to wear face masks and maintain social distancing in accordance with Butler County and Miami University guidelines to help minimize the risk of coronavirus transmission.