Day of Reflection: Commemorating 175th anniversary of the Miami Tribe's removal from their homelands

“This ground beneath our feet is home, a place where countless generations of our ancestors left footprints as they lived their lives until a fateful period in the history of this country,” Miami Tribe of Oklahoma Chief Douglas Lankford said. 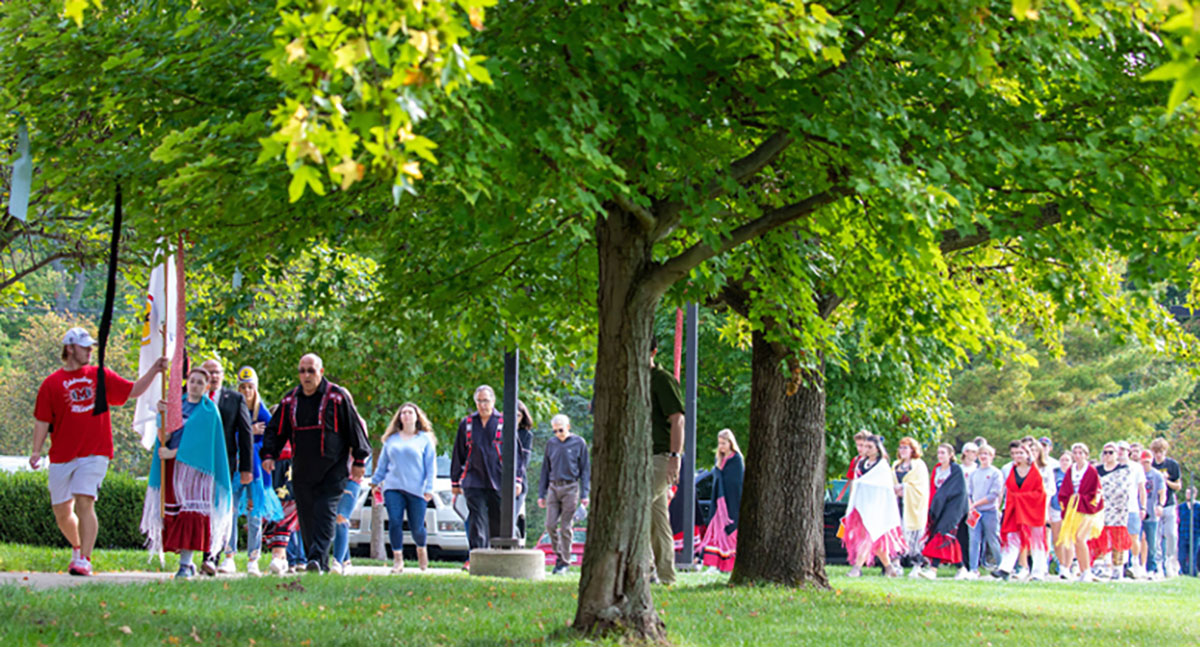 Miami Tribe of Oklahoma citizens, Miami Tribe students and the Miami University community walked from the Art Museum to the Myaamia Center at Bonham House as part of the Day of Reflection commemorating the 175th anniversary of the Miami Tribe's removal from their homelands.
Oxford and Beyond

Day of Reflection: Commemorating 175th anniversary of the Miami Tribe's removal from their homelands

Miami Tribe of Oklahoma citizens, Miami Tribe students and the Miami University community walked from the Art Museum to the Myaamia Center at Bonham House as part of the Day of Reflection commemorating the 175th anniversary of the Miami Tribe's removal from their homelands.
by Jessica Rivinius, university news and communications • Published 10/22/21 • Last updated 2/01/23 8:22:39
Share:

More than 300 Miami Tribe citizens and campus community members gathered on Miami University’s Oxford campus on Oct. 11 for a Day of Reflection commemorating the 175th anniversary of the Miami Tribe’s removal from their homelands.

The solemn program began in the Art Museum Sculpture Park, where Miami Tribe of Oklahoma Chief Douglas Lankford spoke about the effects of the removal, and the hurt and loss it caused.

“This ground beneath our feet is home, a place where countless generations of our ancestors left footprints as they lived their lives until a fateful period in the history of this country,” Chief Lankford said. “And though Myaamia people had lived in this vast homeland region since time immemorial, the stroke of (President Andrew Jackson’s) pen permanently altered our destiny.”

In 1830, President Jackson signed the Indian Removal Act, which in October 1846, forced Myaamia men, women, and children into holding pens, then canal boats, to relocate them to Kansas and finally Oklahoma. Chief Lankford described what it must have been like for his ancestors, ripped from their lands and clutching hands full of dirt from the only home they had known, as men with guns and bayonets barked orders at them.

“We shudder to imagine the scenes, the tears, and cries,” Chief Lankford said. “Think of it — Miami University was born before the Removal Act was signed, and classes were likely in session when those boats passed by taking our ancestors away to a foreign land.”

Chief Lankford said the United States continues to struggle with the history of removal of and the brutality toward Native peoples. The forced relocation was more than just a removal from land. He said it affected every aspect of identity — from the Tribe’s sovereignty and culture to its language and communal traditions.

“We have emerged from that darkness, surviving to this new day of restored knowledge, vitality, governmental strength, and self-determination, made possible by the reclamation, restoration, and revitalization of our language and culture,” Chief Lankford said.

“From removal to this day, our healing journey has not been without support and allies and friends. We are so thankful for the incredible partnership we share with Miami University,” Chief Lankford said. “Look around and see that we walk together on a good path ahead made possible by our commitment to each other through neepwantiinki — our partnership in learning.”

The event continued after Chief Lankford’s talk with a quiet walk through Miami’s Arts Quad, past the university’s sundial, to Bonham House, home to the Myaamia Center, the research arm for the Tribe. Myaamia students led the procession, carrying the Miami Tribe of Oklahoma flag down the center aisle.

“We recognize that removal from this land resulted not only in the displacement of nearly 330 individual children, women, and men, but resulted in historical trauma that has contributed to persistent inequities and injustices across generations and today,” said Cristina Alcalde, Miami vice president for institutional diversity and inclusion. “We are committed to supporting the culture and language revitalization efforts as well as other efforts that come from within the Miami Tribe and Myaamia Center in our role as partners who are working to contribute to a stronger, more inclusive future.”

Once the group reassembled and gathered at Bonham House, Daryl Baldwin read an excerpt from a letter that Myaamia Chief Toohpia wrote to President James Polk in 1846 that spoke to heartache and loss inflicted by the forced relocation.

“They knew their relocation would set into motion significant changes in the coming years,” said Baldwin, executive director of the Myaamia Center. “What they probably couldn't comprehend at that time was the level of loss and disconnect the next few generations would experience.”

Baldwin said that though the events occurred a long time ago, the associated trauma is still felt many generations later: whole generations of Myaamia people taught to hide and/or be ashamed of their heritage.

“The forces that led to abandoning Myaamia language, culture, knowledge of our history, the very essence of our identity, created a disconnect — a gap — within future generations,” Baldwin said. “We call these generations the lost generations. That is my generation. I grew up at a time when there was little knowledge transfer of my heritage, language, and culture.”

Baldwin said that in the mid-20th century, things began to change and federal acts were put into place to recognize the inherent sovereignty of Indigenous peoples.

“Society as a whole is changing. It is now incumbent upon us as Myaamia people today to pick up the tattered threads that were left for us by our ancestors to begin the process of weaving a different future for ourselves.”

He said the work requires time, resources, many hands, a shared vision for the future, and strong partnerships.

“The history of the Myaamia people is interwoven with the history of this institution,” Miami University President Gregory Crawford said. “Next year, we will celebrate the 50th anniversary of this important partnership. A partnership that is very sacred to Miami University and has shaped us all in exceptional ways.”President Crawford highlighted a few of the milestones in that partnership, including the establishment of the Myaamia Heritage Award Program and the first Miami Tribe students enrolling at the university 30 years ago. May 2021 saw the 100th Myaamia graduate, and this fall saw the largest incoming class of Tribe students.

“The Miami Tribe and Miami University are forever connected,” President Crawford said. “The warmth of our partnership has promoted the advancement and development of the Myaamia Tribe and Miami University. Like tending a fire, the university and the Tribe have a joint responsibility to continuously maintain this relationship, respond to challenges that might arise, and nurture it for future growth. A future that we will continue to journey together.”

View a photo essay of the Day of the Reflection