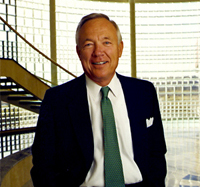 Miami University mourns the loss of alumnus and former trustee Richard “Dick” Farmer (Miami ’56), who died Aug. 4, 2021, after a period of declining health. He was 86.

Farmer, who graduated from Miami with a bachelor’s degree in marketing, left his mark on the university through the Farmer School of Business and a history of service to his alma mater.

In 1992, he and his wife, Joyce Barnes Farmer (Miami ’57), provided the cornerstone gift to the School of Business. A little more than a decade later, they announced a $30 million leadership gift through the Farmer Family Foundation, of which $25 million helped underwrite the construction of the Farmer School of Business building, his namesake. Farmer also served terms as a university trustee, foundation board member and chair of the business school’s board of visitors.

“Dick Farmer’s guidance, insight, support and generosity toward Miami University throughout the years has been immeasurable,” Miami University President Gregory Crawford said. “His contributions to the Farmer School of Business and to Miami University have afforded generations of students as well as faculty and staff members a lifetime of personal and career success. We will dearly miss him.”

After serving in the U.S. Marine Corps., Farmer joined his family’s Cincinnati-based Acme Wiper and Industrial Laundry Co., where he worked until 1968 before leaving to test new concepts and systems within the industry. Two years later, his newly formed company was able to purchase his family’s business. Today, that company, Cintas, is a $17 billion public company with more than 40,000 employees and is the nation’s leading supplier of uniforms.

“When the position of dean of the Farmer School was announced, I researched to learn more about its namesake,” said Jenny Darroch, the school's current dean. “I came away with a tremendous amount of respect for a man who so strongly believed in the value of education as a way to positively impact the future. It also told me that this school and this university must be incredibly special for a graduate to feel compelled to give so much of his time, talent and treasure to support and enhance it.”

Farmer’s business acumen and community-centric attitude resulted in recognition on the local, regional and national level. He was inducted into the Greater Cincinnati Business Hall of Fame, named E&Y’s Entrepreneur of the Year, was honored by the Cincinnati USA Regional chamber as one of the “Great Living Cincinnatians” and was twice named CEO of the Year by Financial World magazine.

“As a former chair of Miami’s Board of Trustees, Dick was a role model for those of us who would follow in his footsteps,” said David Budig, chair of Miami University Board of Trustees. “His generosity, kind heart, and deep commitment to Miami have left an indelible mark on this university. He truly was a remarkable person who will be greatly missed.”