Roger and Joyce Howe (both Class of 1957) have made generous and significant contributions to Miami University for the purpose of improving student writing so that all Miami students are recognized as excellent writers. Since 1996, they have committed over $15 million to create the Howe Center for Business Writing (formerly the Howe Writing Initiative) and the Roger and Joyce Howe Center for Writing Excellence, including a recent $3 million gift to coordinate writing support across the entire campus. The Howes believe nothing in education is more important for students' future careers than developing clear and persuasive writing ability. 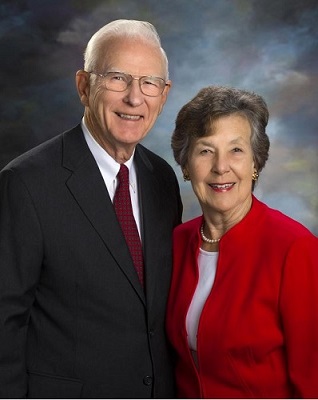 “For some years [Joyce and I] have been concerned that too many college graduates, although impressively educated in most areas, cannot express themselves well in writing. Nearly all the highly successful people I have observed over a long period, regardless of their professions, are clear and persuasive communicators in writing. It seems to be a common thread.” — Roger Howe

Roger Howe graduated from Miami University with a BS in business. He was employed for 13 years by the S.D. Warren Co., a Boston-based fine paper manufacturer. He worked in sales management, product management, and as Director of Advertising. In 1970 Roger purchased U.S. Precision Lens, a small maker of plastic optics in Cincinnati, and built it into a world leader of innovative optical systems for the photographic, instrument, and television industries. In 1986 he sold the company to Corning, Inc. and remained as Chairman of the Board until his retirement in 1997.

Roger Howe’s record of service to Miami University includes membership on the Business Advisory Council and the Board of Visitors of the Farmer School of Business, the University Foundation Board, and the Board of Trustees, which he chaired for three years. He was awarded an honorary Doctor of Laws degree from Miami in 1987 and was inducted into the Cincinnati Business Hall of Fame in 1998.

In 2022, Roger Howe was awarded the Great Living Cincinnatian award.

Joyce Lutz Howe graduated with honors from Miami University, where she majored in Fine Arts with a specialty in graphics. Joyce has pursued her personal art career specializing in watercolor, mixed media, and oil painting. Her works have been sold in galleries in Cincinnati, OH; Chicago, IL; Petoskey, MI; and Boca Grande, FL. She is particularly recognized for her talent with watercolors. She was a docent for the Cincinnati Museum of Art, served on its board of trustees, and has been a significant contributor.

You can read more about the Howes on the Alumni Association website.

The mission of the HCWE is to ensure that Miami supports its students in developing as effective writers in college, and fully prepares all of its graduates to excel as clear, concise, and persuasive writers in their careers, communities, and personal lives.